My lucky break- working for the Godfather of whale science

My big break into the whale world was certainly getting to work on the R/V Odyssey, Dr Roger Payne’s research sail boat. I still have to pinch myself that this actually happened. Roger was one of the scientists that first discovered humpback whales sing complex songs. This discovery in the late 1960s helped to elevate whales to being thought of more as intelligent mammals than huge, blubbery fish (which if course they are not) and this helped to kick-start the ‘save the whales’ movement, that culminated in the signing of the international moratorium to end commercial whaling in 1986. 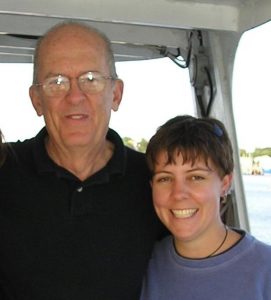 One of my happiest memories, meeting Dr Roger Payne, the man who co-discovered humpback song and a hero of mine

As a child growing up loving whales, every documentary, book and film about whales usually featured Roger, as he was one of the first scientists studying wild whales. Even now, many films still feature his words. He is one of the most post poetic, poignant orators on whale conservation even now. 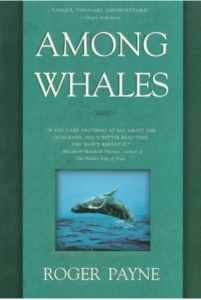 Although Roger’s amazing book Among Whales is quite old now, it still comes highly recommended. I only wish he had written more.

My internship at Cape Ann Whale Watch was affiliated with Roger’s non-profit Ocean Alliance and at the end of my time there we were told about the proposed Voyage of the Odyssey. 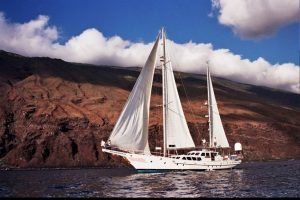 The plan was a five year, round-the-world expedition to study sperm whales, and specifically the build-up of man-made chemicals within their blubber. Man-made chemicals dissolve in fat and not in water so when they enter the ocean, they end up collecting in the blubber of whales and dolphins. They enter at the bottom of the food-chain in plant plankton and increase, it is thought ten-fold, every step up that is made in the food-chain. This means that by the time you get to the top predators in the ocean, some of them are carrying such high toxin loads they have to be disposed of as toxic-waste when they die, instead of as biological material. 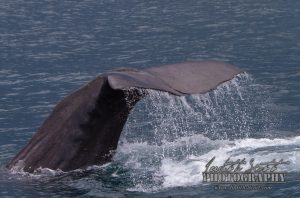 Sperm whales lift their tails high when they go on a deep dive. They feed at great depths on benthic squid and fish.

The voyage I was to become a part of was designed to try and get some base-line data of what kind of toxin loads sperm whales were carrying. It began in 2000, ending in 2005, and during this time I spent around 2.5 years on board in various parts of the world. It was the adventure of a life-time, with many amazing moments, and lots of difficult ones too. But being a part of such a prestigious undertaking has certainly helped open doors for me in the whale-world ever since. I will write more of my adventures soon.